So when Genshin Impact turned out to be a single-player Action RPG I was kinda disappointed. I love Anime inspired MMOs and the market is ready to once again be captivated by one.
Naturally, then, when Bandai Namco announced their latest game “Blue Protocol” you can imagine how excited I was.
Not because the game was Anime inspired. No. But because it looked like Genshin Impact – or Breath of the Wild, more appropriately, and is confirmed to be an online role-playing game.
According to Bandai Namco’s press release, the game is set in a world with “overwhelming graphics along the lines of Anime movies,” and that it is a “multiplayer online role-playing game,” with all of “the qualities of an online game.”
While that isn’t a confirmation of it being an MMORPG – AKA, Massively Multiplayer Online RPG, it is confirmed to be a Multiplayer Online RPG nonetheless.
Now, this could mean two things.
First, it could mean that the possibility is there for it to be like Final Fantasy XIV – an MMO where you get hundreds of players occupying concurrent spaces of land working alongside or against one another.
Alternatively, it could mean that it’s more along the lines of something like Soul Worker or Phantasy Star: You have a party of players and can then play the game together with a group of friends. 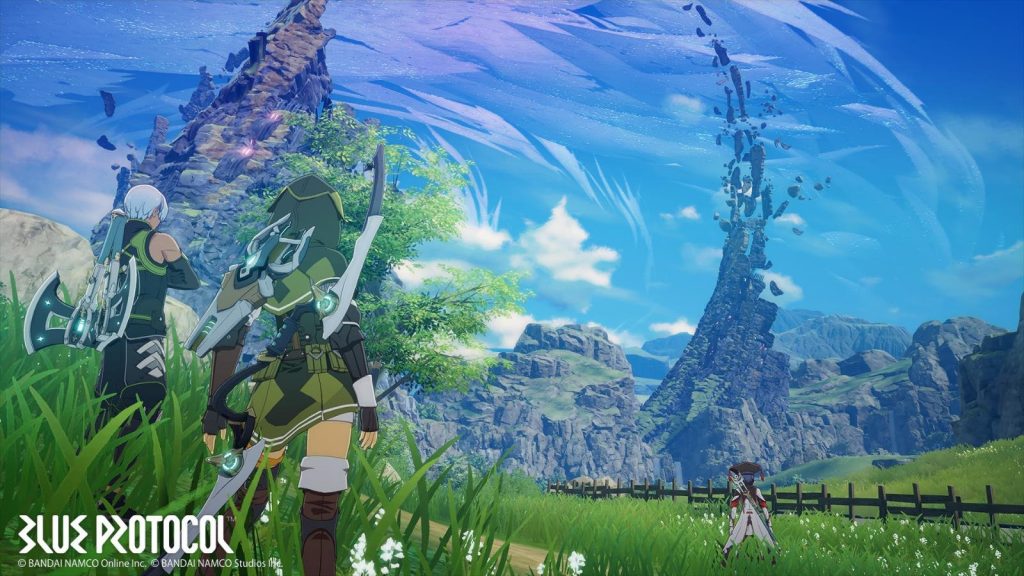 The game is being developed by Project Blue Sky – a group made up of team members from Bandai Namco Online and Bandai Namco Studios.
Little concerning the game has been revealed as the game was just announced, but Blue Protocol is built on Unreal Engine 4, just like Bandai Namco’s other currently in-production game Tales of Arise.
Only a single image has been revealed thus far. They’ve seamlessly blended the Anime-esque visuals and realistic mountainous backdrops to create something that looks a lot like Tales of Arise, honestly.
And that isn’t a bad thing. I’m a huge Tales of games fan, loving Tales of Symphonia, Vesperia, Abyss, Destiny, Phantasia, Zestiria, Xillia.. you know. It was my childhood.

And.. that about sums it up.
Bandai Namco are continuing to focus on RPGs while beginning to work on MMOs as well. Bless Unleashed is one in specific, and while I don’t have very high hopes for that, Blue Protocol has my attention.
Anime MMOs aren’t all that common anymore and Peria Chronicles is pretty much the only game we have to look forward to of its kind, and even then, that’s a long ways off.
So seeing companies, especially companies as large as Bandai Namco with teams capable of actually creating a high quality MMO take it on is promising.
Yes, at the end of the day we might be getting our hopes up over nothing.
It might end up being a multiplayer co-op game like Borderlands, that allows you to party up with a few other players and journey throughout the world together.
But even if that is the worst case scenario – which I’m really hoping it isn’t, would that really be so bad? I play every game with my wife, and we have a couple friends that play video games as well.
So even in the chance that this turns out to be nothing but an online multiplayer game I plan on making the most out of it.
Especially since it’s going to be a PC title, with Bandai Namco stating that they plan “to push the limits of what PC hardware can do.”