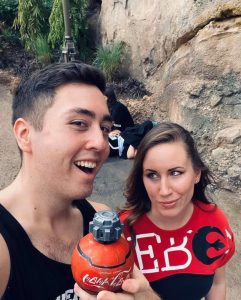 Hey, my name’s Stix (the idiot on the left) and I run the MMOByte/MMOByte Mobile Youtube channels. I work together with my IRL waifu for laifu, Mrs Stix (the beauty on the right) on various types of gaming-related Youtube videos and stream occasionally on Twitch. We’re just two people that enjoy MMOs (like World of Warcraft and Final Fantasy XIV), RPGs (like Zelda: Breath of the Wild and Horizon: Zero Dawn) and co-op (like Borderlands 3 and Outward) genres immensely, binge Anime (like Fate/Stay Night (Unlimited Blade Works, of course,) and Fruits Basket), TV series (like The Witcher and The Chilling Adventures of Sabrina.)

We’re just two people, two individual people. We get labeled, repeatedly as “a company,” or “a corporation,” but the reality is: We’re just two completely, normal nerdy people that love playing games and creating content for our community to consume. Love or hate us, it’s the truth.

MMOByte and MMOByte are both Youtube channels with their own individual gaming-related focus.

MMOByte is largely focused on the MMO genre, but more specifically, PC-related MMOs as there’s quite a large disconnect between PC gamers and mobile gamers. While we are predominantly an MMO-focused channel, we do dabble in RPGs and co-op games as well because, well, Mrs Stix and I play everything together. The couple that plays together, stays together after all!

MMOByte Mobile is on the other hand focused on mobile games, in an attempt to separate the two genres and the two fanbases we have. This way, those of our fans that appreciate mobile games have a channel focused solely on the type of game they’re after, and can keep up to date with not only news, but only see our reactions and opinions to various games they may already play or have overlooked in the past.

Honestly, my younger sister Wiggy and I, who I used to originally do videos with, wanted to upload World of Warcraft-related PvP videos to Youtube as we were largely focused on WoW at the time. We had the name “iDentity Gaming,” but changed shortly after to “MMOByte” after I realized that I wanted to do more with the channel. I saw that there was a hole in the MMO niche, there were a few content creators creating content targeted at specific games, but for the most part, they neglected the scene as a whole. Wanting to change that, wanting to bring a variety of MMOs back into the spotlight, I created MMOByte. This was my way of changing how the MMO scene was viewed. And through difficulty, through mistakes – both self-induced and unexpected, we’ve gotten to where we are today: We have one of the largest general MMO-centric communities on Youtube, and we’re showing no signs of slowing down.

There are various ways our community interacts with one another: Reddit and Discord are the most common platforms, and as such we need staff to moderate both. We wouldn’t be able to grow on any of these platforms, nor would our community be as well moderated without any of these amazing people:

Each person serves their own role and goes above and beyond to help. If you have any issues with anything related to either of the above platforms, they’re the people you should be contacting!