I’ve talked about Phantasy Star Online 2 several times over the latter half of 2019 due to the fact that seemingly out of nowhere, Microsoft announced they were bringing the popular Japanese MMORPG over to North America. Yes, North America.
That was the region the game was confirmed for – we’re still waiting on official confirmations as to whether it’ll be possible to play the game outside of the country, if there will be global servers, or.. well, there are a lotta questions left unanswered with regards to the game and its overall accessibility worldwide.
Regardless, it was announced that beginning on Monday the 16th – yes, that was 2 days ago, players located within North America and Canada would be capable of signing up for the Closed Beta test coming up through the Xbox Insider Program.
If you get accepted, not only will you receive closed beta access, but you’ll also receive additional rewards.
The closed beta doesn’t have a definitive date as of this moment, with “sometime early February” being as conclusive as we’ll likely get for the foreseeable future, but what was confirmed was that the closed beta will be exclusively for the Xbox One.
Don’t let that get you down though – PSO2 was confirmed for the PC alongside the Xbox One. They’re merely opting to go this route first.
According to the Xbox website, you’ll be capable of registering for early sign-up on Windows 10 as well, but right now this closed beta is targeted at Xbox users only.
To register, you are required to have the Xbox Insider Hub installed on either your Xbox One or Windows 10 device – unfortunately there’s no way of getting around that.

For those of you unaware of specifics surrounding this release, earlier this year at E3, Microsoft announced their plans to bring Phantasy Star Online 2 over to North America during – and I know this is a little more vague than a lot of you would like – but Spring 2020.
The game will be launching on both Xbox One initially, and PC later in the year with full cross-play compatibility between the two platforms.
Do note that the Xbox boss Phil Spencer revealed earlier this year – and I actually did an entire video on this so if you’re looking for more specific details, I’d recommend checking that out – that PSO2 will “end up on all platforms.”
This is exciting news as they’ve confirmed cross-play compatibility between the Xbox and PC versions of the game, and while it’s probably not going to happen with all platforms, it would be very cool to see that become a reality.
Imagine being able to play with every player on every platform. That’d be truly epic, but it’s likely just wishful thinking.

Since the announcement, there’s been a complete overhaul of the official Phantasy Star Online 2 website.
Scrolling down I saw tons of new information – which I’d like to quickly go over for both fans of the game, and for potential new players because let’s be real here, with a following of over 200,000 subscribers now, and quite a substantial amount more by the time this officially launches.. you know there are going to be a lot of new players interested.
Phantasy Star Online 2 is a Sci-fi MMORPG. It has combo-oriented action combat that allows for players to swap between several different weapon types at any given time, providing you the ability to fulfill various roles in the group.
Saying it has “unparalleled action” is a bit of an over exaggeration, but rest assured the combat itself is very fulfilling and highly engaging.
The website states that it has the “ultimate character creator,” and that isn’t.. untrue. It has the ultimate character creator for an Anime MMO, definitely.
I’ve never had the ability to customize a character in an Anime MMO as much as I did in PSO2. You have several races you can choose between, with each race having their own general look and feel, which provides more of a sense of… I dunno, I guess originality?
It makes them much more distinctly discernible.
Most importantly, though, Phantasy Star Online 2 will be 100% completely free-to-play on every single platform it releases on – and I’m only speculating here – but one would assume in every region it launches in as well.

This is all highly exciting news. Phantasy Star Online 2 is Japan’s most popular MMORPG – with crossovers with other video games, Anime series and more happening seemingly every other month.
The amount of success this game has had within the region, and even stretching much further out across the world is unreal.
There was a very large, very professionally done fan translation of the game that allowed for non-Japanese players to play the Japanese version of the game, and tens of thousands if not more Western players have since played the game for years.
And it stands to reason as to why – there isn’t really an MMO playable right now that is like PSO2. We’ve been waiting since 2012 to play this game over here legally and without issue, and we’re finally going to be able to.
To me, Phantasy Star Online 2 is one of the best Anime-inspired MMOs available to this day. I’m disappointed it’s taken so long to launch in the West but at the same time, I’m not going to let that hinder my enjoyment of the game.
I have expectations – high quality translations, considering the budget behind the game, a lot of content, since Microsoft announced we wouldn’t be behind the Japanese release, and.. Well, actually.
What I would like is the option to play the game with either Japanese or English voice acting. I know some of you guys really loathe English voice acting in MMOs – I hear ya, trust me.
If you’ve ever heard Aion, Blade & Soul, Black Desert or… any South Korean MMO you’d know how bad they all sound.
But then we have games like Final Fantasy XIV, Elder Scrolls Online and World of Warcraft that all have incredible English voice acting, so it’s possible to achieve.
Thus, I’d like to be able to have the option to toggle the language if possible, as I’m a fan of English dubs in some games and even in some Anime like Dragon Ball Z, Fullmetal Alchemist: Brotherhood or Death Note.

I do look forward to playing this with everyone next year, and hope that you’re all equally as pumped to jump in when it inevitably launches in Spring.
I also hope that the game launches globally, or at least allows for players from other regions to play with players from North America.

Again, make sure you sign up for the closed beta test. That way, regardless of whether you apply for either the Xbox One version or the PC version, you have the potential to get in and test the game out long before it launches! Trust me, it’ll be worth it!

How do I sign up for the closed beta? 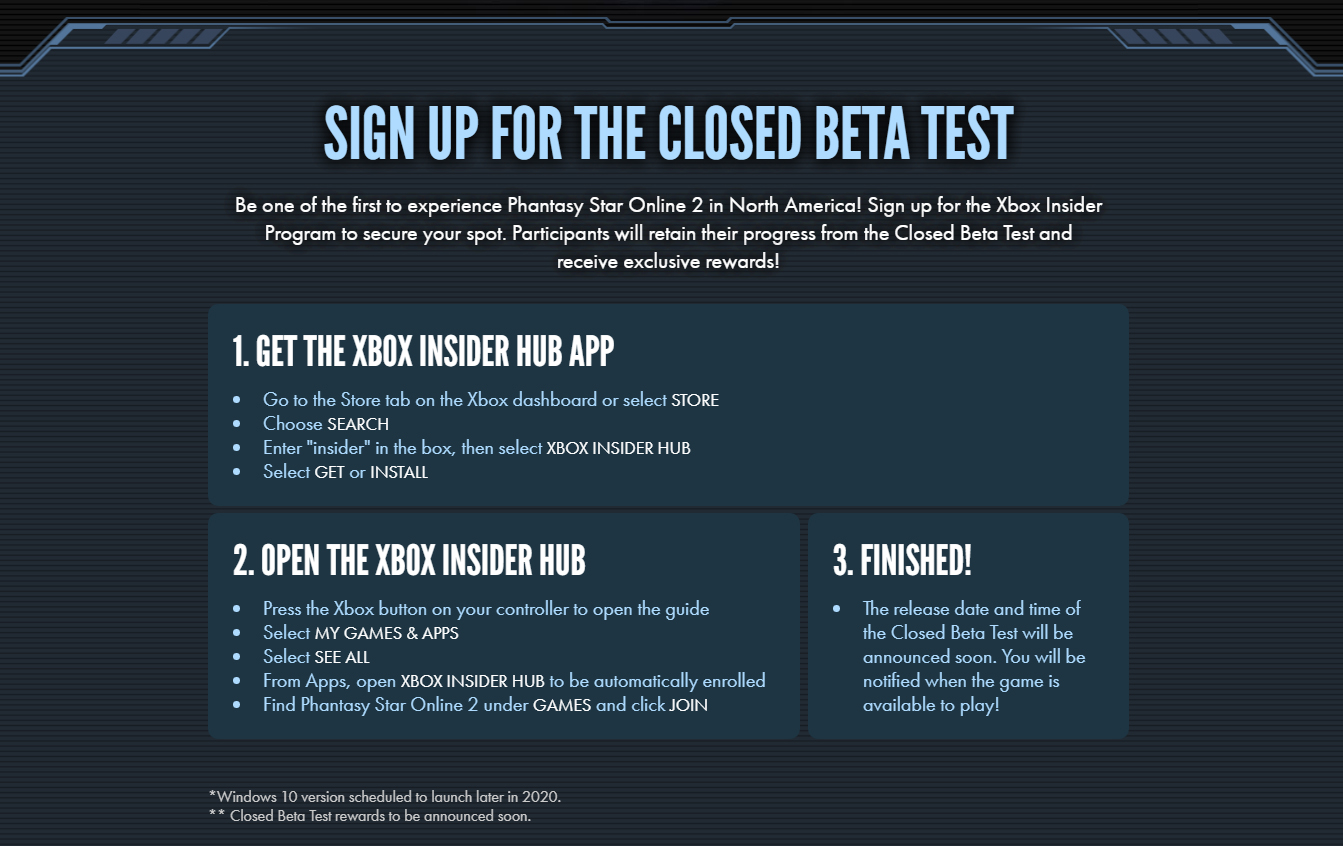