After radio silence for what seems like an eternity, evidence has come to light pertaining to the release of Moonlight Blade in the West.

If you’re not already in the loop, allow me to give you a quick rundown of what the game is.

Moonlight Blade is a wuxia themed action MMORPG with gorgeous graphics and combat comparable to something like Blade and Soul.
Moonlight Blade was originally released in China back in July of 2015 by Tencent, one of China’s largest gaming developers. It was met with quite the reception – with Wiggy and I logging in around mid 2017 and seeing the starter areas housing – and I’m not exaggerating here – hundreds of new players.
But then that is to be expected – the population of China is over 1.4 billion. To put that into context: North America has a population of over 580 million. Europe has a population of over 740 million. Tallied together, North America and Europe combined have a total population of a little over 1.3 billion. So China alone has a population larger than both North America and Europe combined.

Add onto that there are more gamers in Asian countries than in Western countries and.. well, that should be enough to give you an idea of why there are so many players playing concurrently.

While I’m sure Moonlight Blade will have a following when it comes over to both North America and some of Europe, I can guarantee the playerbase is going to be quite niche.
If you didn’t pick up on my pointing out “some of Europe” earlier, though, allow me to elaborate a little.

Moonlight Blade is being released in the West by Nexon.
Nexon is widely known for IP blocking a lot of countries – such as the majority of South East Asia, Russia, Germany, Ukraine, and various other European countries.
I’m aware that is because Nexon is required to purchase distribution, operating, and publishing licenses in those countries but you can be certain a lot of the world is going to be IP blocked from playing Moonlight Blade.
If you’re IP blocked from playing Vindictus, MapleStory, Riders of Icarus or any of their other games.. you won’t be able to play this either, unfortunately.

Now, back on January 7, 2017, I did a (very poor, admittedly, in retrospect) video detailing how Nexon had gained publishing rights for Moonlight Blade – and that we could expect information in the near future regarding its release.
All we had confirmed was that it was coming both to North America and Europe. Then, we got over a year and a half of complete silence on the issue..
However, in Nexon’s recent financial report to their investors, they outlined their activities and plans for the future. 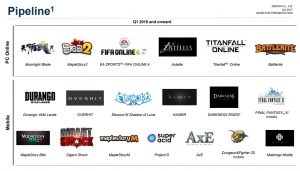 Listed for release in North America were games like MapleStory M, Overhit, AxE, Magia, Final Fantasy XI Mobile, and.. Moonlight Blade.
While several of those games already have confirmed release dates, Moonlight Blade does not. What we can be certain of, though, is that Nexon is definitely still at work localizing the game for a Western release.
And with how large the game is.. and trust me, the game is absolutely huge, both in actual scale, and in terms of how much text there is to translate, I can understand why it’s taking them so long.
Well, that and the fact that the vast majority of Nexon’s overall revenue comes from both China and Korea.

Now I know what some of you are going to say..
“Nexon? Ew! It’s going to go pay to win!” – Yes, that’s completely plausible. But be glad Gameforge or My.com didn’t get their hands on this – they ruined the MMORPGs they got recently and I’m glad Nexon got Moonlight Blade.
“The graphics look so dated now. Black Desert Online looks better!” – True, Black Desert does look better, especially with its remaster. However, for a niche realistic wuxia MMORPG, I dare you to find a better looking one.
“The combat looks so slow compared to other games!” – It is. The combat, although similar to Blade and Soul requires a little more thinking and a little less “head smashing on keyboard-ing”.
“It’ll be 2020 before we get the game” – Very possible. With the scale of the game and the sheer amount of effort required to translate it, it’s a very probable possibility.

And.. probably dozens of others. But those are the most important ones that I’m answering pre-emptively. Now, what are my overall thoughts on this?

I loved Moonlight Blade when I played it. I love the wuxia theme both in movies, in TV series and in video games.
Some of my favorite movies of all time include things like Crouching Tiger, Hidden Dragon and Iron Monkey. And even though Into the Badlands is super cringy.. I cannot get over how beautiful the movements and action is in that show.
So you can imagine how disappointed I was with Revelation Online.. yet, even so, I have hope that Nexon might pull through with this one.
I’m aware of their history with pay to win, but if they can successfully pull off MapleStory 2 without it plaguing the game, which they promised me personally through email that they would, then I can personally get behind it.
Moonlight Blade, that is. I feel like it’s still a ways off, though, but that is more than okay. We have a lot of potentially good MMORPGs on the horizon and adding Moonlight Blade to that list is far from a bad thing.

So, overall.. I’m excited, but skeptical. Like always.
What do you think?