Is Noah’s Heart Manipulating Their Pre-Registrations?

Is Noah's Heart Manipulating Their Pre-Registrations?

People often ask me.. “Stix, why do you cover so many crappy Asian MMOs like Noah’s Heart, Tower of Fantasy, Gran Saga.. they’re all weeby Anime trash that look and play like crap.”
And this. This right here is why I cover crappy Asian MMOs.
In the short period that Noah’s Heart has had pre-registration open, they have accumulated a grand total of 6,518,881 players interested in the game.
For reference, Lost Ark was one of the largest MMO releases in recent memory, topping 1.3 million total concurrent players at its peak, with over 4.7 million total players registered and playing within a 3-day period. Not even Final Fantasy XIV managed to pull numbers like that on the launch day of Endwalker.

Despite the gargantuan interest in Lost Ark, which was in no small part due to the extensive marketing Amazon did for the game, having streamers, Youtuber’s, news websites all cover the game – Noah’s Heart has its eyes set on absolutely dominating the market upon its release, shattering every record set before it.
All while averaging a grand total of 2,120 followers on Twitter, and 20 to 30 likes per Tweet. 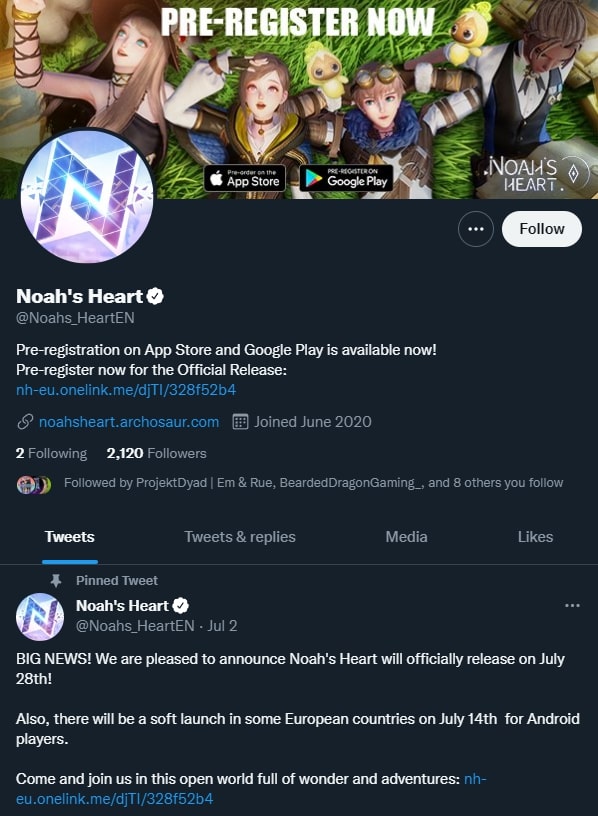 6 and a half million interested players.. and 2 thousand of them followed their socials? That sounds a little off to me. Especially given the fact that the official Noah’s Heart joined Twitter 2 years ago, and has therefore had years to garner a following online.

Let’s take a moment here and compare this to a few other games announced recently, that are going to be direct competition for it.

Here’s Zenless Zone Zero, a game that was just announced. And in the 3-month period their Twitter has been online, they’ve accumulated 174,600 followers and average thousands of likes per Tweet.

“But Stix, that’s a Hoyo game, you can’t compare a game like Noah’s Heart to a game being developed by Hoyo,” That argument holds some weight, which is why we have several games to compare this to.

Here’s Wuthering Waves, a brand new game revealed what, last month? And in the month the Twitter has been public, they’ve accumulated 34,600 followers, and average thousands of likes per Tweet.
I mean I’m beginning to see a little bit of a pattern here, but this is just 2 games. Not nearly enough to drive across my point.

Here’s Arknights: Endfield. Another gorgeous new Anime game announced just a couple months back that has had their Twitter public for all of 2 months? Has accumulated just shy of 50,000 followers, and – in a shocking turn of events, averages thousands of likes per Tweet.
Alright, alright. While all of these games were announced within the last few months, there is only one game currently available that is true, direct competition for Noah’s Heart.
Yes, all of these games are open-world Anime games. But Noah’s heart is also an MMO. So let’s compare it directly with an MMO launching in the very near future, at approximately the same time.

Tower of Fantasy is an MMO I’ve been hyping for over a year now. It’s a game I both had a ton of fun in, and simultaneously feel is going to underperform after players realize how different it is to traditional MMOs, and how similar core systems are to Genshin.
Nevertheless, in the few months their Global Twitter has been public for, they’ve accumulated just shy of 70,000 followers, and average…. well, admittedly significantly less interaction than the aforementioned titles. But several hundred, to several thousand likes per Tweet, showing a growing interest in the game.

This is.. a strange occurence. It’s almost like these highly anticipated games have people not only following their social accounts, but also simultaneously actively engaging with the Tweets they make.
Compare that to the negligible sum that Noah’s Heart have amassed, yet the overwhelming number of players supposedly interested in the game? Things don’t add up.
Heck, even Artery Gear: Fusion, a competing game that just launched last month has 6,000 followers and averages hundreds of likes per Tweet. And they only had approximately 500,000 players pre-register for their game leading up to their launch. That’s less than 10% of the total Noah’s Heart has.

Many people believe Archosaur Games, the team behind Noah’s Heart are fabricating those numbers. Manually altering them periodically to achieve numbers that are so unbelievable – that it has left many of us.. well, in disbelief.
This is an MMO with no real direction. Poor quality combat that is mostly auto-play. A pretty mediocre world design. And all ’round a sub-par game. I’d say it’s actually a step BACK from what Dragon Raja was.
And there are 6 million people waiting to play this? You jest.
Now there has been speculation that a lot of these pre-registrations came from TikTok as Archosaur have been advertising the game over there – but do you mean to tell me, that you go out of your way to navigate to their website to pre-register, and not bother to follow their socials? Only 2,000 out of 6.5 million did?
C’mon. What do you take us for?

Yes, this could be the biggest MMO release of 2022 – by far. But at the same time, the odds are in favor of this being a massive marketing ploy that is about to blow up in their face. And I’m more than happy to be covering it. Bringing it to the attention of some of you.
Even if that means the Noah’s Heart community will pull out the pitch forks and want to crucify me. What else is new.