Is NEVERWINTER Worth Playing in 2021?

Home / Is NEVERWINTER Worth Playing in 2021?
Latest News

Is NEVERWINTER Worth Playing in 2021?

I never really found myself drawn to Dungeons & Dragons as a kid. Yet at the same time, I’m a fan of the Neverwinter universe. I played both Neverwinter Nights and Neverwinter Nights 2 on PC back when they were relevant RPGs. So when it was revealed years ago that they were making a Neverwinter MMORPG, I was ecstatic. I love MMOs and I love RPGs – especially the world of Neverwinter so I couldn’t contain my excitement. However, having played games like World of Warcraft, RIFT, Aion.. I felt myself without much in the way of time to really invest into the game, letting my excitement fall victim to the joy I got out of playing the aforementioned titles. Until March 2021, that is, when I decided to finally jump into the world of Neverwinter all over again.

To begin the game you’re greeted with a fairly basic, but not overly limiting character creator.
You’re given the option of selecting your race from quite a few different options: Human, Half-Orc, Wood Elf, Sun Elf, Dwarf, Halfling, Half-Elf, Tiefling, Drow, Dragonborn, Metallic Ancestry Dragonborn, Aasimar, Gith, Moon Elf and Menzoberranzan Renegade.
Each race has their own distinct, unique racial abilities that have a direct effect on your character, with certain races being more beneficial for certain classes.
Speaking of Classes, we have the choice between Cleric, Barbarian, Warlock, Rogue, Fighter, Paladin, Ranger and Wizard. Being the pyromaniac I am, I opted for Wizard because.. naturally. 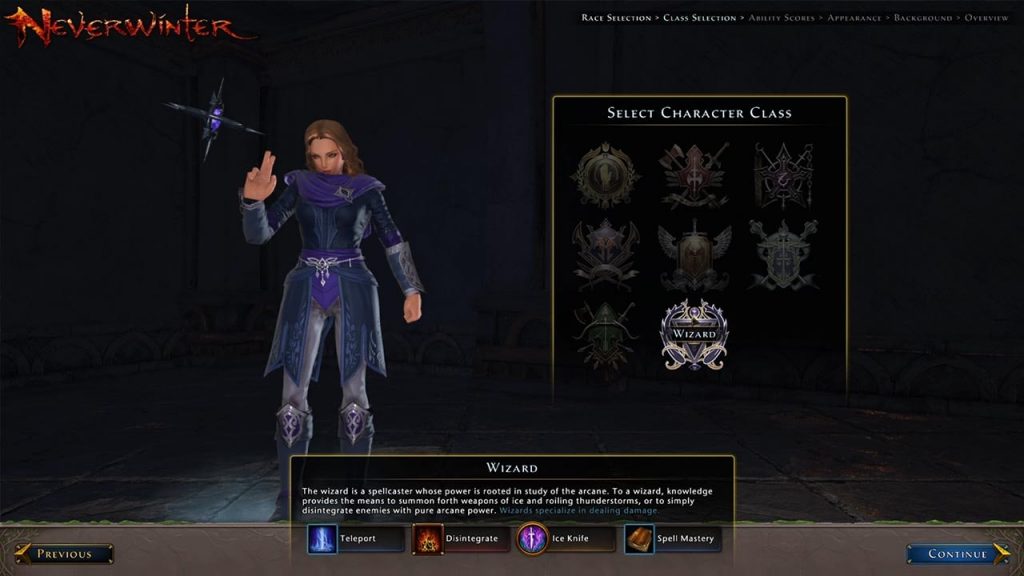 Upon reaching level 30, you’re given the option of expanding on your class further by selecting from 2 more advanced classes. As a Wizard I had the option of both Thamaturge and Arcanist. While I couldn’t figure out which of the two were the better pick, I did like the elemental affinity that Thaumaturge had, so opted for that. And it didn’t disappoint!

Now upon first logging in to your character you’ll come to quickly realize that the combat is an interesting hybrid between both tab-target and action. You require a target for single-target abilities, but don’t require a target for AoEs. Additionally, while you technically require a target, you can cycle through targets by merely changing the target your reticle is on. No tab-cycling required. This makes it very easy to change targets on the fly, but at the same time you run into the issue of enemies moving in front of one another, preventing you from chaining abilities onto a single target.

While the combat was a lot of fun and very engaging, it’s worth noting that the difficulty of the game rapidly increases by the level. Every new area I went to, every new instance I ran had me struggling to survive, and with the lack of gear from quests, I found myself often being entirely overwhelmed by groups of enemies. Which, admittedly, made the game much more challenging than I had ever anticipated it being and often required I utilize my classes kit – teleporting – to my advantage. Slowing enemies with my ice AoEs while teleporting back and behind pillars to attempt to line of sight the monsters that would chase me relentlessly. 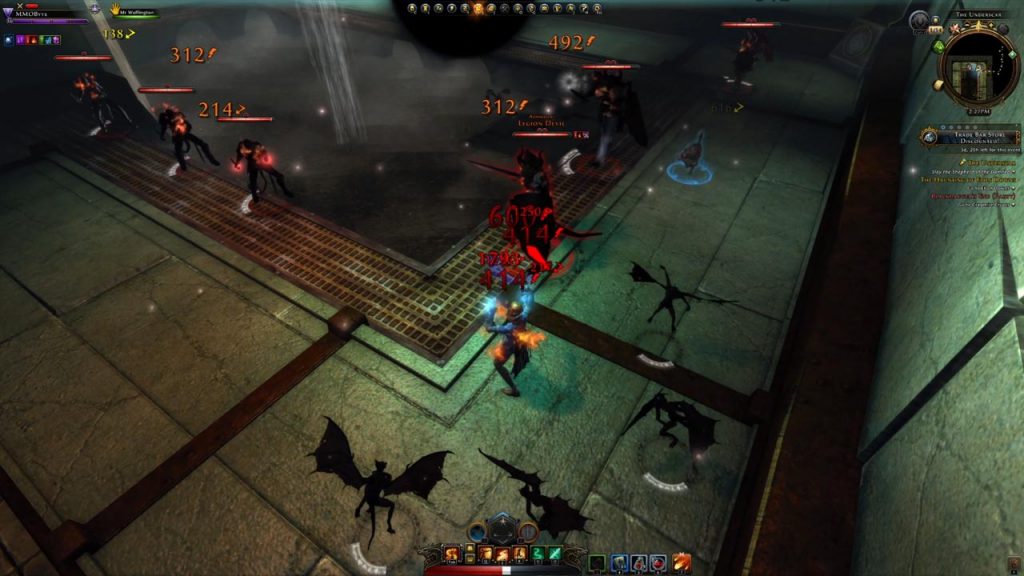 Bosses were even more difficult encounters, as not only would you have to deal with the boss directly, but you’d also be hit by repeated waves of enemies, often leaving you with the option of whittling down the groups of enemies before turning your attention to the boss, or singling out the boss and trying to kite the enemies until you’ve downed it before changing your focus. Often I’d target the boss first as it would continue to summon additional waves of enemies over time, which would – in essence – become a never ending battle.

Outside of instances, however, you’re met with a pretty darn good looking world. The world itself is semi-instanced, semi-segregated. There are loading screens that separate the zones from one another, with each zone having a recommend level range to enter but there aren’t really any restrictions that I encountered. Now I use the term “semi-instanced” purely due to the loading screens, whereas you’ll encounter plenty of players out in the world participating in content just like you are. The segregated world in no way limits your ability to see or play with other players. I actually found myself more often than not attacking the same enemies as other players since we had the same quests to do as one another. 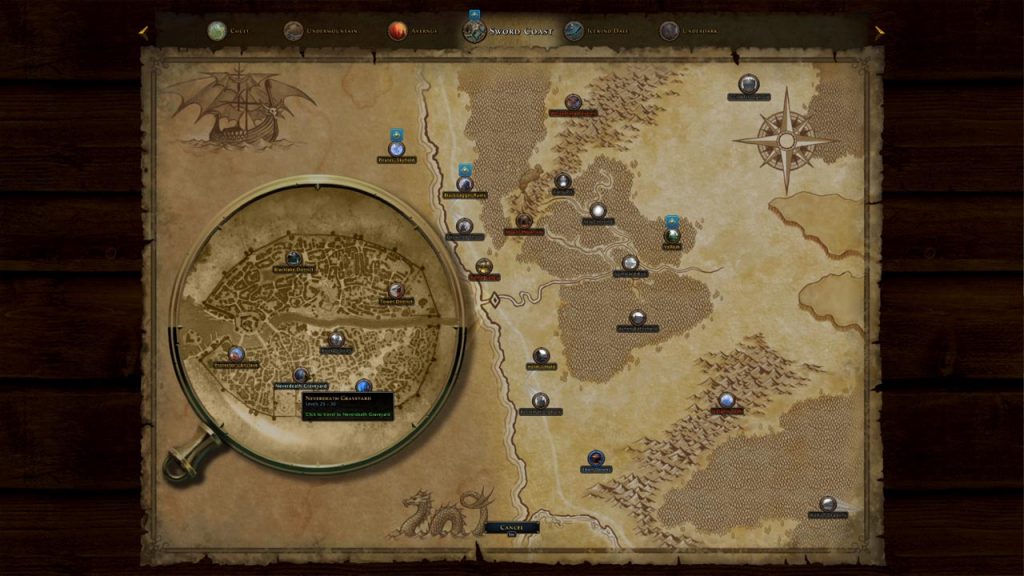 Each zone has its own identity: There are NPCs, quests, enemies and entire unique aesthetics specific to every region, making them easily distinguishable from one another.

The leveling was a little on the slower end of things, unfortunately. To speed this up I went ahead and purchased premium currency so I could attempt to purchase better gear, a stronger companion and an XP boost, but since I got locked and placed on a “probationary period,” it was $20 wasted. So kudos to you, Perfect World Entertainment. You got me to waste $20 for nothing in return.

Ultimately, Neverwinter is a very good looking game that plays even better than it looks. This is an MMORPG I never expected to lose myself in as much as I did and I couldn’t have wanted a more entertaining way to waste through the last week and a half. There are a lot of things Neverwinter does right, and while there are some things it doesn’t (bizarre animations, pay-to-win in the cash shop, slow leveling,) they’re definitely outweighed by the sheer amount of entertainment you can garner from the game. This is definitely one of the more fun games out there if you’re willing to overlook a few issues.