GrandChase is a relatively old MMORPG that’s been around since August 2003 by KOG Studios. However as of July 3, 2018 the sequel to the original GrandChase was released called: GrandChase Dimensional Chaser, or more simply referred to by the majority of people, GrandChase. This was launched onto the Android, iOS, iPhone and iPad, with the emulator engines following soon after like Bluestacks. Thus allowing one to play this and any other iOS / Android games or MMO’s on their PC without the need of a mobile device. 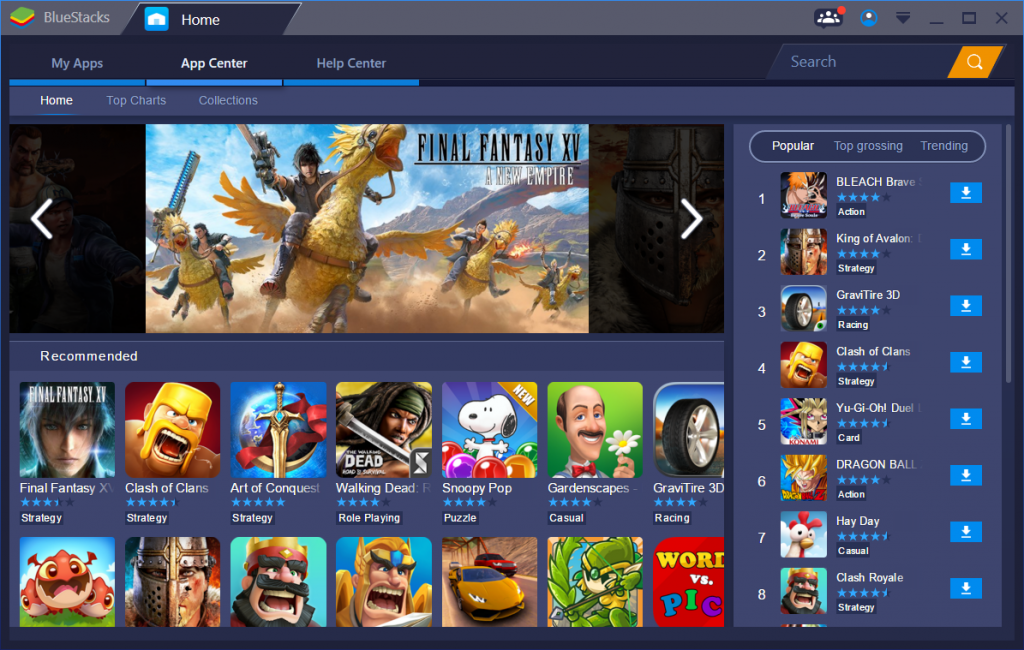 GrandChase, unlike the original MMO, is a single player experience. It is also now an action, strategy hero-collector RPG as opposed to the side-scrolling action MMO GrandChase originally was. Graphically speaking, while it did lose its 3D appeal, the mobile sequel is still quite visually pleasing with the scenery and visuals one sees whilst playing being in my opinion top tier. Doubly so when taking into consideration the normal level of quality one comes across when playing through an iOS / Android game. Then the characters themselves; be it in their more simplistic sprite form during gameplay or their illustrated versions are all quite beautiful and animated well with some nice anime stylization.

Now if GrandChase sounds familiar to you than it could be due to the fact Elsword (an MMORPG also released by KOG Studios) is actually the “spiritual” successor to GrandChase even using some of the very same characters from within the game; with different names and or backstory.

Initially, GrandChase might seem like your A-typical Gacha system hero-collector many mobile games turn out to be but, this does not seem to be the case as with GrandChase. Every hero can be collected through in-game means, something not truly prevalent in most iOS and Android games due to the sheer desire to make money. From daily login bonuses, gaining achievements, completing story missions, participating in the tower rushes, there’s many ways to tackle this game, with or without the Gacha system.

As mentioned above, GrandChase is a hero-collector and with it being as such, there are a lot of differing characters to collect, each one having their own unique abilities, passives and gameplay styles. However each class whilst being unique do fall under a specific “class” category. Warrior, Mage, Ranger, Tank, etc. These classes can be leveled up individually thus affecting every character under that specific class. This does not mean however one cannot level up said favorite characters or heroes. Each character can be upgraded, boosting their stats by sacrificing minions or monsters gathered from playing through the battle levels. Once used they will either succeed in leveling your character or fail causing no effect. After enough level’s have been gained through this system one can in essence evolve their character, boosting their stats further, changing their look and even, depending on the upgrade, unlocking new skills. Prestige and Awakening’s are also available to those who have evolved enough allowing you to go even further beyond. Gear may also be applied to your characters to help increase their defense or attack power independently of their actual stats, gear can be rewarded randomly via participating in battle, keep in mind that however heroes by default have no gear so it can be difficult gearing every character, especially when they all have
class specific gear sets or weapons. 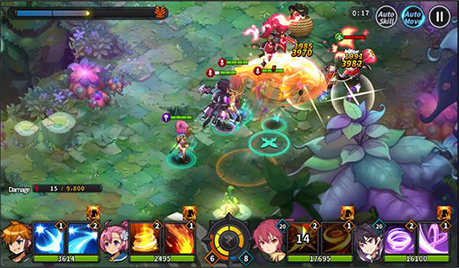 Besides collecting and upgrading ones characters, you will be participating in instanced battles after deciding your destination from the menu screen. Said areas can vary from continuing with the story, revisiting older areas to grind, PvP battles as you vs against similar skilled players, “Trial Tower”, a place to test your party’s abilities in combat with you fighting waves of monsters. If that wasn’t enough then there is also things like, “Daily Defense” missions, “Dimensional Bosses” battles, a Heroes Tower to conquer and lastly the Wizards Labyrinth. However these aren’t inherently unlocked, you must first continue enough through the actual games story content. Progressing through will not only unlock these missions but explain a little more of what GrandChase is all about.

This leads me to the story aspect of GrandChase, which has cut-scenes, in game scenes, and manga like stills to explain all that goes on. Which is a nice change of pace as most iOS / Android games I’ve typically played especially hero-collectors have minimal story to tell, if any at all.

Lastly I’d like to mention the combat itself found within GrandChase, combat typically being an important if not crucial part of any game be it MMO or not. The combat is on the more strategic style of action based combat, with you being able to slow time whilst placing your skills down. This is quite helpful as at times monsters can horde your characters leaving little time to accurately place your abilities.

This is generally GrandChase, it’s a new hero-collector, action RPG. It’s better than most others I’ve played thus far and definitely something I’ll take a look at more in the future. It’s just a shame you have to play it on a small screen. Luckily I typically play / record these games on emulators like Bluestacks making the gameplay and general enjoyment of my game time more thrilling due to it being playable on my PC with configurable keybindings.

Is The Mobile Release Of GrandChase Worth Your Time?