Alright, before we jump in let me preface this by stating that there are some truly.. remarkable people in this world.
These people.. definitely do not fall into that category.

Unfortunately, there are people out there that believe if you voice a video game character – if you play the role of a character in any form of media, then you are solely responsible for everything pertaining to them. Now this isn’t the first time something like this has happened.
I don’t know how many of you recall, but back when 2.1 dropped – even despite the event being a success, fans were.. unimpressed, going as far as to make the claim that the English voice cast were exaggerating their emotions and that their excitement was forced.
While I’m not in a place to comment on the validity of those claims, Zach Aguilar, the male voice of Aether spoke a little on the topic.

I’m frustrated. Voice actors don’t know everything about the projects we’re in. We’re normal people with jobs that we do our best on.

People make all these assumptions about us and our work, esp with English VAs. There’s a lot we can’t clarify. But mentally, it’s draining.

Now, we all know that Genshin has quite the.. expressive community. And, I’ve seen Genshin fans take things too far on a multitude of occasions. Most frequently concerning characters.
But this? This is absolutely absurd. Gui Niang, the Chinese voice actress for Kokomi was recently harassed by a plethora of different people during a live stream.
Yes, Kokomi might not necessarily be the best 5-star character, and yes, there are players out there that believe she needs to be on the receiving end of buffs, but come on.
Going into someone’s stream only to verbally lash out at them, blaming them, criticizing them, and holding them accountable for something that is entirely out of their control? What kind of messed up mentality is that?
Voice actors have no more influence over what happens to or the ability to dictate the general direction of the characters they voice than you do. You don’t like a character? Don’t use them. You don’t like a movie or TV series? Don’t watch it. You don’t like a video game? Don’t play it.
Don’t begin harassing the actors, the players or the community for something that they have no control over. Sure, get as frustrated as you want. Voice your discontent. But take it up with miHoYo, they’re the ones responsible for everything.

This sparked a large discussion over on the “Kokomi Mains” subreddit, with players remarking on the double standards players seem to have concerning certain characters.
Case in point: Concert_Great, who went on to state
“Just like those incels at Genshin main subreddit lol “Raiden is underwhelming” = She needs a buff “Kokomi is underwhelming” = She’s trash omegalul, who plays her anyway, even Amber is a better healer, fuck Kokomi in general lmaoo” 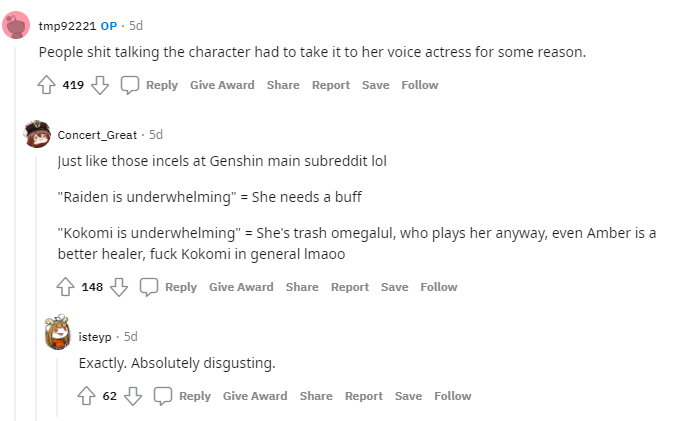 Thankfully she received a lot of positive support from players as well, which, unfortunately, she’ll likely never see as I’m uncertain if she’d ever even use Reddit. It can be quite a cesspool of drama, negativity and toxicity at times.

Now I understand that Genshin Impact appeals to a largely younger demographic. But just because the general audience is young, doesn’t give them the right to act as childishly–as inappropriately as they have been.
Again, this is not the first time and I guarantee you this will not be the last. But let me reiterate: Voice actors are not responsible for the direction developers choose to take characters within the game.
Lashing out at them, blaming them, harassing them will accomplish nothing other than hurting the person behind the microphone, who’s job is to bring their character to life. And they don’t deserve that.
So be better.